Throughout the length of his undergraduate career, Bryson Green praised the Lord for the blessing of his education through his dedicated service to the University Gospel Choir. But that was just the start of his work and success.

My word of inspiration to you all are: “Let your motivation be your success, and with wisdom and intelligence, your determination and perseverance will help you excel to your prosperity.”

One day soon, Rene Espinoza Kissell plans to position herself in academia to build a better understanding and clearer policy ties between race, class and education that change real peoples’ lives in a positive way. In other words, she’s chosen to put her PEOPLE program experience to work in the real world. 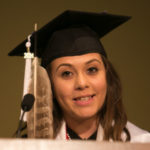 Lisa Wrazidlo was born on the Bad River reservation located in northern Wisconsin, making her a Wisconsin native to the core.   And like so many Wisconsin youth, her family had a long term plan for her to earn a college degree at UW-Madison.

“I spent my summers on the University of Wisconsin-Madison campus taking classes to prepare me for the upcoming school year, making friends, and learning about the university and college,” Wrazidlo reflected about the expectation that had become a part of her.  “I decided to come to UW-Madison because of the status and prestige of the University, the full-scholarship, and, honestly, because it was all I knew.”

When the time came, going to college at UW-Madison was all she had hoped and expected it would be.

“Academically I was challenged and was afforded the opportunity to learn from amazing professors. Socially I made a lot of great friends that supported me throughout my time on campus and beyond. The PEOPLE Program served as my support system, kept me “in line”, and provided me with professional development—which has been crucial post-graduation. More than anything, though, the program gave me a chance. There is no other program (that I am aware of) on campus that actively seeks to serve or recruit native students. We are more often than not forgotten.”

And life happens. Who’ll be there to help us through?

When Lisa’s mother was diagnosed with cancer in her last semester, she immediately went home. While she attended to what she had to do, the PEOPLE counselors and American Indian Student Academic Services advisor worked with her professors and the Dean’s office to keep her on track to graduate.

“I was so close to earning my diploma. Of course, I still had a lot to do in regards to keeping up with my work and remaining responsible—but without that initial help I am sure I would have not been as strong had I had to do it all on my own. I probably would have dropped that last semester—and postponed graduation until the next semester, which would have ruined my attendance in law school in the fall.

Although PEOPLE bridged a critical gap for her, there is a desperate need for service expansion in the areas of cultural adaptation and creating an inclusive climate that bridges the distance between Madison and the Northwoods, as well as a sense of belonging for Native students on campus. But these needs didn’t diminish the joy of graduating.

“It feels amazing to make my mother’s 22 year old dream come true. I am the first in my family to graduate and the only to go on to attend law school. I had so many struggles in undergrad—and I made it. It is an honor and a huge accomplishment—but I know it cannot stop there. I have so much more to do.”

Lisa is now a a law student at the University of Arizona James E. Rogers College Of Law on a full tuition scholarship in Tucson, Arizona, where she is focusing on Indigenous Peoples Law, Indigenous Human Rights law, and Environmental Law.

“I have already began plans to give back. Once I am out of law school I will be creating a scholarship program for Bad River, Red Cliff, Lac Courte Orielles, and Lac du Flambeau high school youth who are accepted into the PEOPLE Program,” she said. “I think that giving back or supporting the program is important because had it not been for PEOPLE I would have not been afforded the many opportunities that I was given—nor would I have developed the confidence and belief in myself and my abilities. Furthermore, it is important to strengthen our communities by giving youth confidence, hope, and a dream. A lot of students where I am from are not given confidence or hope and as thus not allowed to dream.

“It is an important value within my culture to use individual talents for the betterment of the community and I am blessed to have been a part of a program that is built upon the motto “lift as you climb”. If, and whenever I am able, I would love to give back directly to the program.”